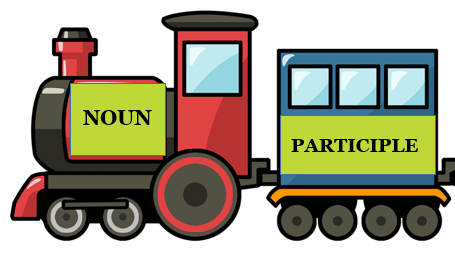 Participles have the following features:

(i) They are verbs that, like adjectives, describe a nearby noun.

(ii) They have one of three possible forms:

PRESENT: -ing added to an active verb (e.g. going) or the BE part of a passive (e.g. being seen). As both of these are also the form of gerunds (which act like nouns – see 70. Gerunds), and simple -ing forms can also be nouns (see 240. Nouns that End with “-ing”), or ordinary adjectives (see 245. Adjectives with a Participle Ending), confusion is possible. The term “present” is slightly problematic because -ing participles can refer to past actions as well (e.g. Leaving Britain, Caesar rushed to Rome).

PERFECT: having + “past” participle (e.g. having seen, having noticed). This is another form that is sometimes a gerund rather than a participle. It is considered separately in this blog in 267. Participles and Gerunds with “Having”.

To make any participle negative, just place not in front (not noticing, not seen, not having read).

(iii) They cannot be the only verb in a sentence – there must always be another verb (even if it is just an auxiliary). This is what grammar books mean when they call participles “non-finite”.

Guinlist posts dealing with the other participle positions are respectively 75. How to Avoid “Dangling” Participles,  71. Gerund & Participle Uses of “-ing” and 101. Add-On Participles. There is also a separate post (232. Verbs with an Object + “-ing”) on participle versus non-participle -ing after a noun object of another verb, like this:

(a) The agency HELPS children living in poverty.

PROBLEMS WITH PARTICIPLES PLACED JUST AFTER A NOUN

By “ordinary verbs”, I mean verbs in a typical tense form like present simple (operate/s), past simple (operated), or present continuous (is/are operating). It is quite a common error to use an ordinary verb, especially the last kind, when a participle like operating in (a) is required instead. It is also quite common for grammar-checking software to wrongly think a having participle can be the only verb in a sentence (see 275. How Computers Get Grammar Wrong 3, #6).

The usual reason for a participle being necessary instead of an ordinary verb is the sentence already possessing an ordinary verb but lacking any verb-linking word like and or which. Two ordinary verbs cannot be together in the same sentence without such a word (or a semi-colon). Participles do not need such words because their ending (-ing, -ed) is the equivalent of one (see 30. When to Write a Full Stop). Very often the ordinary verb accompanying a participle will be has/have or there is/are (see 161. Special Uses of “There” Sentences, #7).

Here is a sentence where a participle facilitates verb-addition. What form should the added verb MAKE have?

This needs the “past” participle made. The ordinary forms makes and is made are wrong because there is no verb-linking word enabling them to accompany the main verb comprise, while the “present” participle making is wrong because the meaning is passive (with its expected object as its subject: see 4. Verbs that don’t have to be Passive). One could also say which is made – indeed lone “past” participles like made are often viewed as an abbreviation of their use after which + BE (see 192. When BE can be Omitted).

2. Confusability with Other Joining Devices

It is incorrect to place who, which or that before a participle without BE, e.g. *which made after metal in (b). This confuses two possibilities that are each correct without the other (see 133. Confusions of Similar Structures 1, #3).

Expressions like *which made are incorrect because the same verb (MAKE) then has two joining devices (which and irregular -ed), which English does not allow. With who, which or that, an ordinary verb is needed instead of a participle: in (b) the present simple is made (preferable here to the present continuous is being made).

The combination and made is possible in some contexts, but not in (b) since it again creates two joining devices instead of one. To use and, you have to say and they are made.

3. Requirement to Use Commas in a Special Way

When participles after a noun correspond to ordinary verbs with who, which and that, the comma rules of the latter apply (see 34. Relative Pronouns and Commas). Consider these:

(c) The London located in Canada is less well-known than London in England.

(d) The Taj Mahal, located in Northern India, is a great wonder.

The same thing happens with -ing participles. No commas are possible in the following because the participle living acts like who live to help identify which people are meant:

(e) People living in glass houses should not throw stones.

The frequent ability of participles to replace who, which or that + ordinary verb does not mean that they always can. The relative pronoun must be the subject of the verb after it. In the following, the subject is they instead:

(f) Everybody moved away. Hence, the work THAT they were involved in stopped.

Replacing the underlined relative clause here with the participle involved would remove they, thus nonsensically making work its subject instead.

There are also situations where a participle cannot usually replace a relative clause despite having the right subject. These are when the verb in the relative clause is active and either surrounded by commas or signifying a past completed event, e.g.:

(g) (ACTIVE + COMMAS) The Prime Minister, who heads the government, is appointed by the President.

It would be incorrect to say *heading in (g). An -ing participle between commas is not always incorrect, but it must express an action or state that is both simultaneous (or nearly so) with that of the main verb (earlier actions are possible but need a having participle) and also a reason for it. Heading a government is not normally a reason for being appointed by a president. Here is an example of a reason-showing -ing participle with commas:

5. Confusability with Participles before their Noun

The positioning of a participle before or after the noun it describes is decided by a variety of rules. In sentences like (a), where the described noun (children) is the object of another verb (helps), participles follow it if they are combined with their own object or adverb expression, e.g. living + in poverty, but must go first if combined with no other words (…helps living children).

Outside of these positions, participles still usually follow their noun if they begin a longer phrase (see 109. Placing an Adjective after its Noun), but by themselves some precede their noun, some follow it, and many allow a choice. Examples of the use before are the rising sun, improved results and related ideas; examples of the use after are dots appearing, matters arising, answers found and results shown; and participles allowing variable use include emerging, remaining, observed, indicated and preferred.

Guidelines on which lone participles can go where are scarce. It is important first to distinguish participles from participle-like adjectives, such as interesting, welcoming, relaxed and bored, since these behave like adjectives in general in typically preceding their noun in the situation in question. For a list of distinguishing features, see 245. Adjectives with a Participle Ending.

One especially useful indication of -ing adjectives is ability to follow very; while many -ed adjectives have a meaning that differs in an unpredictable way from that of their related verb. For example, the adjective advanced means not “put in a forward position” but “technically sophisticated” (see 261. Words with Complicated Grammar 3, #2).

The meaning of a participle can sometimes indicate where to position it: properties or constant conditions before the noun, one-off events after. Compare:

Describing nations, emerging is a state (constant emergence), but with colour it is a single event. Preferred before its noun means “generally preferred”, but after it “preferred in this case”. The use before is close to being adjectival (see 66. Types of Passive Verb Meaning).

The following exercise is similar to one in my book Grammar Practice for Professional Writing. You have to put the capitalised verbs into their correct forms (answers afterwards).

1. An essay WRITE carefully and accurately may receive a high grade.

3. A diameter is a straight line PASS from one side of a circle to another through the centre.

4. According to scientists, the current unrestrained burning of fossil fuels CAUSE a dangerous amount of global warming.

5. A questionnaire was administered and the data OBTAIN SHOW some surprising trends.

17 thoughts on “52. Participles Placed Just after their Noun”

This site uses Akismet to reduce spam. Learn how your comment data is processed.